The ninth iteration of the World Rail Market Study has been released, with projections showing the rail market will achieve good long-term growth in the 2025-27 period. 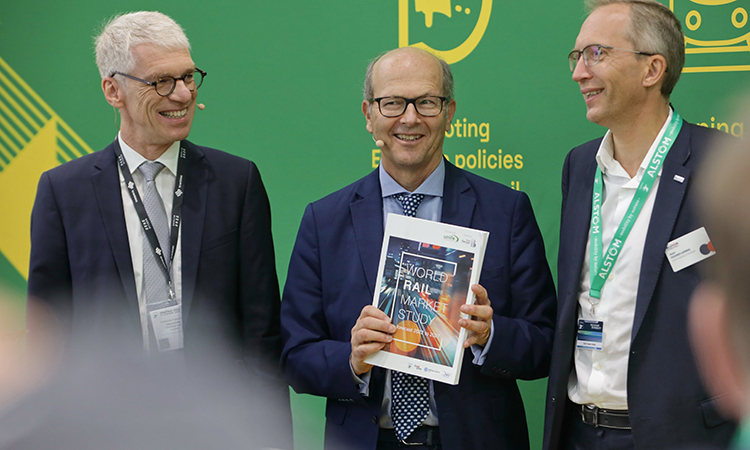 The ninth edition of the World Rail Market Study, conducted by Roland Berger, on behalf of UNIFE – the European Rail Supply Industry Association, has been unveiled at InnoTrans 2022. The study provides practitioners and policy makers with the most comprehensive overview of the global market. It also lays out an in-detail forecast of its projected future development across 65 countries divided into seven regions, amounting to 98 per cent of global rail traffic.

This iteration has found that the global rail market will experience an average annual growth rate of 3.0 per cent through to 2027 reaching a global market volume of EUR 211 billion between 2025 and 2027. The highest growth rates are forecasted in the relatively small markets of Africa/Middle East and Eastern Europe, with 7.1 per cent and 6.1 per cent increases, respectively. However, more mature markets like Western Europe, Asia Pacific and NAFTA will also grow significantly and therefore account for the largest share of absolute growth.

“After turbulent times during the COVID-19 pandemic, the rail industry has shown its resilience to global shocks,” Henri Poupart-Lafarge, Chairman of UNIFE and Alstom Chairman and CEO, said. “Now, despite ongoing economic and geopolitical challenges, the world rail market will continue to thrive. It is expected to recover from its small downturn and achieve a long-term growth of 3.0 per cent p.a., reaching a total market volume of almost EUR 211 bn p.a. in the 2025-2027 period. However, this ever-growing market should be open to all suppliers to enable truly efficient rail systems. Therefore, strong political action is needed to achieve a level playing field on the world rail market.”

According to the study, considerable investments in infrastructure and rail control were undertaken in Asia Pacific, for instance in China, as well as in Western Europe (e.g., Germany and France), having grown at 1.6 per cent and 4.1 per cent, respectively. The services market showed a steady growth rate over the last two years, which was particularly driven by an increase in the installed bases of rolling stock and infrastructure.

Much of the recorded uptick is linked to progress made in infrastructure. Since the last study, the amount of track currently in operation grew by approximately 39,000km, primarily in mainline and very high-speed tracks. This brought the total global track infrastructure to upwards of 1.7 million km of urban and interurban tracks. Most of the additional track kilometres were laid in the Asia Pacific region, as China accelerated its infrastructure development plan and India has started expanding its mainline and freight corridors.

Furthermore, flagship initiatives like the European Green Deal, with the key objective of reaching climate neutrality by 2050, will have beneficial effects on the demand for rail solutions. In particular, the promotion of alternative propulsion systems such as hydrogen- and battery-powered trains. As the most sustainable mode of transport, rail has the most potential to become the backbone of sustainable mobility worldwide and achieving the climate targets.

“The COVID-pandemic had the expected negative effect in 2020 when the rail supply industry suffered from a c.10 per cent decrease of order income,” Andreas Schwilling,  Senior Advisor for Roland Berger, said. “But the industry recovered fast by the same percentage in 2021 and is now expected to continue the growth path. From a product segment perspective, the largest contribution to overall growth in absolute terms with a projected growth rate between 2.5 per cent to 3.8 per cent is predicted for the services, rolling stock and infrastructure segments which together account for approximately 89 per cent of current market volume.”

Although rail is anticipated to see continued growth as we continue to exit the pandemic, this continues to be constrained by market inaccessibility. At the moment, only 61 per cent of the global rail market is open to international rail suppliers, limiting the full utilisation of innovative new products that promise to decarbonise transport and provide millions with reliable mobility offerings.

“The UNIFE World Rail Market Study is considered to be the most credible reference report for the rail sector and is regularly referred to as a standard set of data for our industry,” Philippe Citroën, UNIFE Director General, said. “This edition of the World Rail Market Study confirms the positive trends of a growing rail market worldwide. Despite the negative effects of COVID-19, rail has proved more than ever that it is a reliable, sustainable, and efficient mode of transport. The digital transformation of the rail industry, together with the increasing demand for sustainable solutions, are key positive trends that will contribute to a continued growth of rail transport in the medium- and long-term.”