BNSF are investing more than $1.5 billion to construct a new, first-of-its-kind integrated rail complex in Barstow. 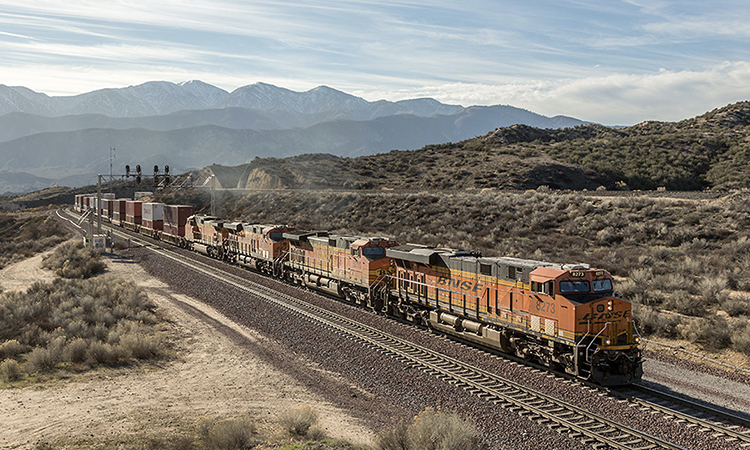 BNSF Railway have announced plans to invest more than $1.5 billion to construct a state-of-the-art master-planned rail facility in Southern California. The Barstow International Gateway will be an approximately 4,500-acre new integrated rail facility on the west side of Barstow, consisting of a rail yard, intermodal facility, and warehouses for transloading freight from international containers to domestic containers.

The facility will allow the direct transfer of containers from ships at the Ports of Los Angeles and Long Beach to trains for transport through the Alameda Corridor onto the BNSF mainline up to Barstow. Once the containers reach the Barstow International Gateway, they will be processed at the facility using clean-energy powered cargo-handling equipment, and then staged and built into trains moving east via BNSF’s network across the nation. Westbound freight will similarly be processed at the facility to bring trains more efficiently to the ports and other California terminals.

“By allowing for more efficient transfer of cargo directly between ships and rail, the Barstow International Gateway will maximise rail and distribution efficiency regionally and across the U.S. supply chain and reduce truck traffic and freeway congestion in the Los Angeles Basin and the Inland Empire,” Katie Farmer, President and CEO of BNSF, said. “This will play a critical role in improving fluidity throughout our rail network, moving containers off the ports quicker, and facilitating improved efficiency at our existing intermodal hubs, including those in the Midwest and Texas. The facility will also have an important positive economic impact, including the creation of new, local railroad jobs.”

“The significance of BNSF’s investment to improve the supply chain here in California cannot be overstated, rail plays a critical role in moving goods safely and efficiently, while reducing emissions due to congestion in many of our high-traffic corridors,” Trelynd Bradley, Deputy Director of Sustainable Freight and Supply Chain Development at the Governor’s Office of Business and Economic Development, said. “Projects like BNSF’s will work to strengthen our inland local economies, such as that of Barstow in San Bernardino County. We look forward to continuing to work with projects like these, as well as others, to drive transformative investments that will enhance and elevate California’s supply chain ecosystem for a more efficient and resilient tomorrow.”

“BNSF’s planned Barstow International Gateway will improve cargo velocity through our port and reduce truck traffic on our freeways,” Gene Seroka, Executive Director of the Port of Los Angeles, said. “This project will help ensure that goods moving through the San Pedro Bay will get to consumers, businesses and manufacturers with speed and reliability.”