The Community of European Railway and Infrastructure Companies has announced SJ’s President and Chief Executive Officer, Crister Fritzson, as its new Chairman. 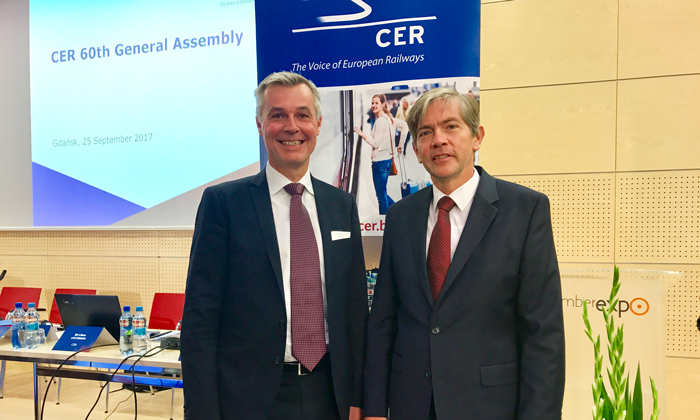 This follows Mr Fritzson’s role as Acting Chairman, which he has held since February 2017.

“It is a great honour for me to have been given this mandate to serve as Chairman of CER,” said Mr Fritzson (who is also Chairman of the Association of Swedish Train Operating Companies, as well as the CEO and President of SJ). “The cohesion and future direction of Europe is facing many challenges. I believe that the railway sector has a very important role to play in this context, being a backbone of environmentally friendly mobility solutions, a promoter of social inclusion, and a large employer.

“I intend to work closely with all the members of CER and the dedicated team in Brussels, but also seek to strengthen the voice of European railways by means of better coordination with other railway organisations. There are many priorities, one of them being the implementation of the Fourth Railway Package, where I will contribute with the Swedish experience of market opening and related reforms in the strive to achieve a truly competitive European railway sector.”

The Community of European Railway and Infrastructure Companies brings together more than 70 railways undertakings, their national associations as well as infrastructure managers and vehicle leasing companies. Its membership represents 73% of the rail network length.

“With Crister Fritzson , CER has gained a committed Chairman with a clear political vision,” added CER Executive Director Libor Lochman. “I am very happy about the General Assembly’s decision to confirm his mandate for the next two years. I am looking forward to working hand-in-hand on our policy priorities aiming to further increase the railway’s efficiency.”

Mr Fritzson will be CER Chairman with immediate effect for a period of two years (2018-2019).