A major redevelopment of the railway through central Croydon to transform railway performance and potentially allow more trains to run on the Brighton Main line – including a new, expanded East Croydon station, extra tracks and flyover junctions – moved a step closer today with confirmation of government funding for Network Rail to deliver the design stages of the project. 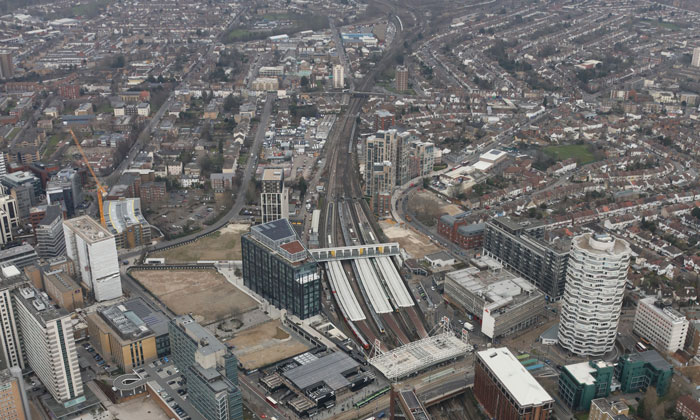 Known as the Croydon Area Remodelling Scheme, the project is the central element of Network Rail’s Brighton Main line upgrade programme to deliver major improvements in punctuality between London, Gatwick Airport and the Sussex coast with the potential for more frequent services in the longer term.

It would see construction of a series of new grade-separated junctions north of East Croydon station to remove the ‘Croydon bottleneck’ where several routes to and from central London converge. These new junctions are like motorway flyovers and will replace the existing flat junctions, where trains have to wait at red signals to allow others to pass in front, causing congestion and delays to 300,000 passengers travelling between the south coast and the capital each day.

Major improvements at East Croydon station would also be delivered as part of the proposed scheme, expanding the number of platforms from six to eight and providing new concourse areas with better access to the platforms and surrounding areas. This would improve the train service along the entire Brighton Main line, transform the station itself and contribute to the ongoing redevelopment of Croydon town centre and the growing local economy.

Funding from the Department for Transport (DfT) means Network Rail can now:

John Halsall, Network Rail’s South East Route Managing Director, said: “Redeveloping the railway through Croydon is the only practical way to further improve the reliability of services on the Brighton Main line and transform journeys between London, Gatwick Airport and the south coast. The Croydon bottleneck is now the single biggest cause of congestion and delays to passengers on this vital rail artery and means that the railway is now effectively full at the busiest times of day. That’s not surprising when you consider that 50 per cent more passengers pass through East Croydon each day than on the busiest parts of the East Coast or West Coast main lines. The funding committed by the Department for Transport means we can now draw up detailed designs for the work at East Croydon station and the surrounding railway and get valuable input from the local community to inform our final proposals.”

Councillor Tony Newman, Leader of Croydon Council, said: “As one of London’s growth boroughs and a major transport hub in the south east, I am delighted funding has been allocated to progress this important scheme to the next stage. These enhancements are desperately needed and, if approved, will significantly improve travel for Croydon residents whilst attracting more people and businesses into our town centre.”

Jonathan Sharrock, Chief Executive at Coast to Capital which is leading the Brighton Mainline Alliance, said: “Our region’s economy desperately needs better, more reliable rail links to London. This scheme will allow more trains to run into London from Gatwick Airport and Brighton and across the rest of the South Coast. Our Brighton Mainline Alliance strongly supports this scheme and the next step is for Government to agree the detailed design of the project and commit to funding.”

Angie Doll, Passenger Services Director for Southern who manage East Croydon station, said: “There are almost as many passengers passing through East Croydon as all the inter-city journeys to the north of London put together. This section of railway also has more train movements over it than anywhere else in Britain, making it a major factor in delays and disruption to our services. Our wholesale recast of the timetable this May will help us run a more reliable railway but the work announced here will also be warmly welcomed by Southern and Thameslink passengers alike.”

This announcement marks another significant investment in improving the Brighton Main line, following the announcement in 2017 of a £300 million government-funded programme to boost the resilience and reliability of infrastructure on key routes in the south east. This includes recruitment of 300 additional maintenance and operations staff, deployment of Digital Railway technology to help reduce delays as well as major work to renew and upgrade the railway itself.

As part of that programme, a series of improvements are taking place on the Brighton Main line between now and March 2019, including the replacement of a key junction at Earlswood near Redhill, a track upgrade in the Gatwick area, and two major planned closures to upgrade the track and signalling and repair historic tunnels between Three Bridges and Brighton/Lewes.