The contract announcement is a major milestone passed in the mission to create the UAE’s modern, sustainable and cost-efficient national railway. 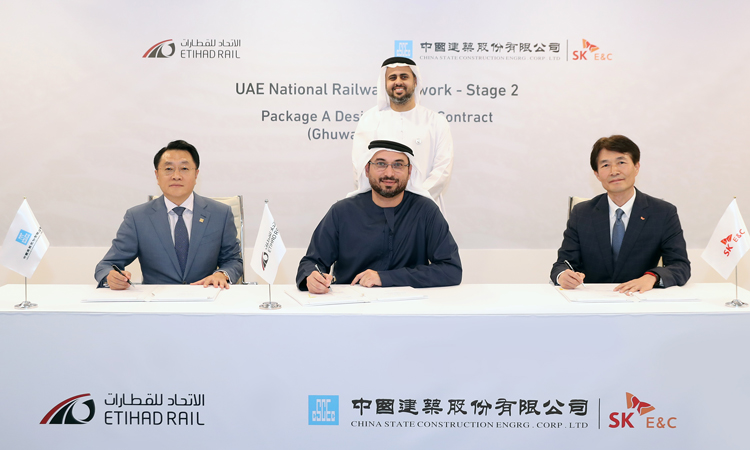 The package includes all design and build, civil and track works of the 139km Package A of Stage Two of the UAE national rail network to connect Ruwais with Ghuweifat on the UAE border with Saudi Arabia. Stage Two, when complete, will run for 605km from Ghuweifat to the Port of Fujairah.

His Highness Sheikh Theyab said: “With the commencement of this first phase of Stage Two, we are reaching a major turning point in the transportation sector in the UAE and GCC. Pioneering and innovative, this initial link is just the beginning as Etihad Rail expands its network to improve all aspects of freight transport across our border and around the region, placing the UAE at the centre of regional goods movement as a global logistics hub.”

Etihad Rail is working diligently and efficiently towards awarding contracts for the rest of Stage Two.

Package A of Stage Two, valued at AED1.5 billion, will focus on the design and construction of rail infrastructure, including earth-works, bridges, tunnels, animal crossing, track-laying, and linking with Stage One of the network. The 139km route will feature standard-gauge double track that will be built using 1.3 million tonnes of ballast, over 400,000 concrete sleepers and 33,000 tonnes of iron rail.

When complete, the 1,200km Etihad Rail project will link the UAE’s principal centres of industry, manufacturing, production, population, and import/export points, forming an integral part of the GCC-wide railway network.

A sustainable solution to mitigate ground-borne vibration caused by trains