Stadler is set to supply 55 battery-operated FLIRT trains to the Schleswig-Holstein local transport association, the first call for green technology tenders in Germany. 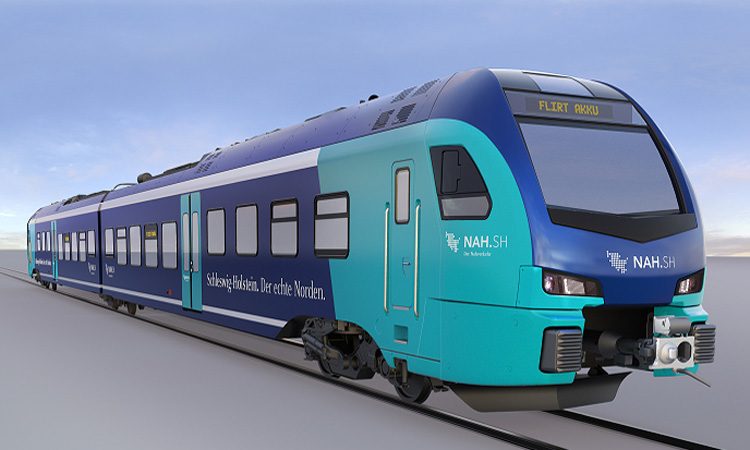 Stadler has emerged as the winner from the call for tenders issued by Schleswig-Holstein’s local transport association (Nahverkehrsverbund Schleswig-Holstein GmbH – NAH.SH) for the supply of 55 battery-operated FLIRT Akku trains with an option for 50 additional vehicles.

Following expiry of the objection period, the contract award is now legally binding. With it, Stadler has successfully asserted itself against other concepts in the first call for green technology tenders (not diesel) for vehicles with alternative drives in Germany.

In addition to supplying the trains, the contract also includes the vehicle maintenance for a period of 30 years. The order volume is approximately €600 million. Schleswig-Holstein’s local transport association, NAH.SH, has awarded Stadler a contract for the supply of 55 battery-operated FLIRT trains.

After presenting the battery-operated drive technology to the public for the first time at the InnoTrans 2018, Stadler has managed to place it in a very large transport contract within a very short time.

The vehicles are due to begin operation on the north and east networks, until now operated with diesel vehicles, starting at the end of 2022. Unlike diesel trains, the new battery-operated FLIRT is significantly quieter, more energy efficient and accelerates better. Under optimal conditions, a range of 150 kilometres was calculated, while the longest route without overhead catenary in the Eastern and Western networks is approximately 80 kilometres.

They are charged via the existing overhead catenary, especially in Kiel, Neumünster, Flensburg, Lübeck and Lüneburg railway stations and on the Osterrönfeld–Jübek line. In addition, additional charging equipment is to be created in selected places and existing overhead contact lines extended, to enable ideal charging of the vehicle’s batteries during operation.

Workshops for the vehicle maintenance are planned in the Rendsburg and Neumünster locations. The two-carriage vehicles of the battery-operated FLIRT Akku type provide space for 198 passengers, of which 124 are seated. Two spacious and accessible multi-purpose areas are provided for wheelchairs, pushchairs and bicycles. The air-conditioning vehicles also have a wheelchair-accessible toilet. All trains are equipped with Wi-Fi, power sockets as well as video surveillance of the passenger areas and a modern passenger information system and ensure contemporary ride comfort.

Jure Mikolčić, CEO of Stadler in Germany, said: “We are pleased that the first call for tenders for vehicles with alternative drives has been decided in our favour in an innovation partnership with NAH.SH. Since 2016, we have been in close and constructive exchange with the operator and with Land Schleswig-Holstein, to find the best possible solution for CO2 emission-free operation of the routes. It makes us very proud that with the battery-operated FLIRT we have not only managed to find an ecological and innovative solution, but have also enabled a clear economic improvement. If we consider the average life of a rail vehicle of around 30 years, battery-operated vehicles are more cost-effective than diesel-operated trains.”

NAH.SH Managing Director, Bernhard Wewers, said: “We look forward to the new trains. Together with Stadler, we are breaking new ground in SchleswigHolstein. Electrification without overhead contact line is an exciting project, which will also be noted with interest in other regions. The timetable is ambitious, but I am sure that Stadler will deliver the new batteryoperated vehicles on track.”