Following the theft of hundreds of metres of railway signalling cable, vital journeys for key workers and freight across the UK have been jeopardised. 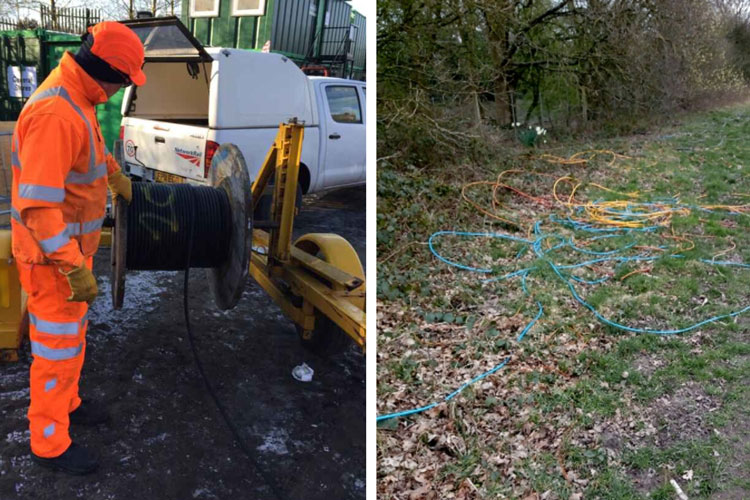 Metal thieves have caused the disruption of countless key worker journeys after ripping out hundreds of metres of railway signalling cable at several locations in Network Rail’s North West and Central region.

Thieves have taken advantage of the COVID-19 pandemic to carry out the criminal activity as a result of less workers and a smaller number of trains being on the tracks.

As a result, journeys for key workers – like doctors and nurses – have been jeopardised, as well as disrupting freight trains carrying thousands of tonnes of food and products to supermarkets across the country.

Engineers worked throughout the night on 28 March 2020 to replace 300m of cabling that was ripped out of the signalling system between Alderley Edge and Crewe, Cheshire. This particular stretch of railway has been targeted 28 times in the last 12 months. Two hundred metres of cable was also stolen near Nuneato, Warwickshire, in the past fortnight.

The complex repairs as a result of the metal theft require railway workers to work side by side, making it impossible for them to be two metres apart and practice safe social distancing during the COVID-19 pandemic.

Special Project Manager for Route Crime at Network Rail, Andrea Graham, said: “At a time of national crisis, it’s despicable that criminals are targeting the railway which is vital to keep people and goods moving. Network Rail is working around the clock to keep services running smoothly so key workers can keep food on the shelves, police the streets, keep essential utilities running, and get staff to and from hospitals to treat the seriously ill.”

Andrea continued: “The fact we have to then repair reckless damage caused by criminals trying to profit from the pandemic – putting our staff at risk from having to work so closely together. We condemn these thefts and will use the full force of the law to come down hard on those responsible. Trespassing on the railway is incredibly dangerous, as well as illegal. Thieves are not just risking a criminal record when they come onto the railway to commit crimes, but risking their lives too.”

Latest figures reveal more than 400 incidents of metal theft on the railway between London Euston and Carlisle in the 12 months to January 2020. As a result, the thefts caused significant delays to passengers and cost the taxpayer an estimated £1.4 million in Network Rail’s North West and Central region. Organised criminal gangs are increasingly targeting metal used in infrastructure and subsequently exploiting high metal prices.

Thieves are being warned that police have sophisticated ways to catch them – with metal marked with a variety of trackable tags.

Gary Jones, British Transport Police Chief Inspector, said: “In these challenging and unprecedented times, acts like this are appalling, particularly as the rail network plays an important role in helping people make essential journeys to support the national effort. It also plays a critical role in the distribution of essential supplies around the UK. Everyone else should be staying at home to stop the spread of the virus, which helps saves lives.”

Gary added: “Offending to illegally obtain money by disrupting vital transport links shows a real disregard for the efforts of those who continue to work on the frontline, fighting this pandemic. It also puts lives at risk, which could place further demand on the already stretched emergency services. Be assured that anyone who steals from the railway will face the strongest possible action.”