Network Rail’s new traffic figures have revealed that passenger footfall has fallen across some of London’s busiest stations by approximately 93 per cent on weekdays, rising to 96 per cent during weekends. 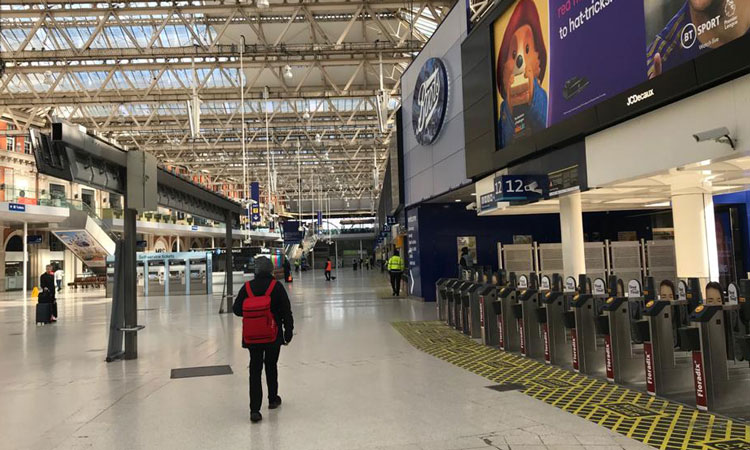 Network Rail has issued a heartfelt thank you to passengers for heeding UK government COVID-19 advice to stay home and limit any unnecessary travel after new figures have revealed that passenger footfall has fallen by an average of 93 per cent at some of London’s busiest stations. Fewer passengers results in safer journeys for key workers and those unable to work from home, including frontline rail workers.

Managing Director for Network Rail’s southern region, John Halsall, said: “The figures show a dramatic decrease in passengers travelling through London commuter hubs and I’d like to thank everyone who is following the government advice and only travelling when it is absolutely necessary.”

John continued: “The railway has been designated as a key service for the country so must remain open to ensure that those who can’t work from home can get to work, while rail freight must continue to carry essential medical supplies to hospitals and food to supermarkets. While it might be unusual to thank people for not travelling, this is an unprecedented situation. I want to urge people to stop travelling if they don’t need to and continue to follow the guidelines so that more lives can be saved.”

The data shows a dramatic decrease in passengers at the some of the main commuter hubs in Network Rail’s southern region – including London Waterloo, London Victoria, London Cannon Street and London Charing Cross stations – since the UK government advised the public not to travel unless essential on 16 March 2020.

Footfall has fallen across the stations managed by Network Rail in the southern region by approximately 93 per cent on weekdays, rising to 96 per cent during weekends. London Waterloo has seen the biggest decrease in footfall, with a dramatic 95 per cent reduction compared to the approximate 125,000 journeys that are made through the station on an average weekday (representing 94.2 million journeys through the station a year).

The UK’s Rail Minister, Chris Heaton-Harris, said: “I am delighted to be in the unprecedented position of thanking people across the country for joining together to stay home, protect the NHS and save lives, and avoid using our railways. Figures show that footfall at Waterloo, Victoria, Cannon Street and Charing Cross have decreased significantly – a fantastic sign that people are listening to the advice to stay home wherever possible.”