Elliot Rothwell, David Crosbee and Simon Iwnicki, colleagues from the Institute of Railway Research (IRR) at the University of Huddersfield, discuss the latest findings from the ‘CaFiBo’ project, which seeks to develop a lightweight composite bogie frame that will reduce stresses on rail tracks due to rolling contact fatigue and wear. 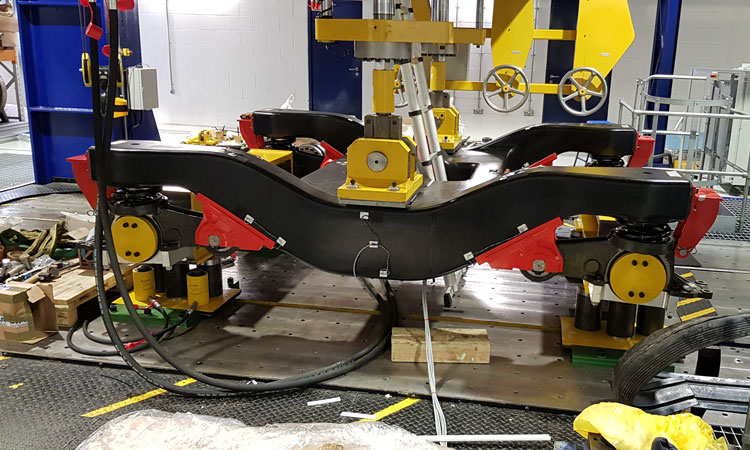 Figure 1: The 'CaFiBo' bogie on test.

As previously reported in Global Railway Review, the Carbon Fibre Bogie project (‘CaFiBo’) is currently developing a carbon fibre railway bogie for passenger trains. The main aim of the project is to reduce the mass of the bogie and, in turn, to reduce track damage and vehicle maintenance costs through the use of a lightweight composite bogie frame. The project consortium has successfully designed and manufactured an equivalent to a Class 180 bogie from a combination of recycled and virgin carbon fibre. The bogie is currently undergoing substantial testing at Huddersfield University’s adhesion and rolling contact dynamic test rig.

Increased speeds and axle loads, longer trains and traffic density in busy corridors have led to increased stresses on rails due to rolling contact fatigue and wear. This poses a significant risk to safe and reliable rail transport and can lead to higher maintenance requirements, service interruptions and downtime. The CaFiBo lightweight bogie frame directly addresses this challenge through the reduction of forces on the track. The mechanical properties of the bogie can be tailored to provide strength where required and, potentially, could allow for integrated suspension and steering functionality. Computer simulations have demonstrated that forces on the track could be reduced by up to 40 per cent, reductions in fuel consumption by up to 20 per cent can be achieved and fibre optic strain measurement built into the bogie allows for the continuous monitoring of the condition of the bogie, which could also indicate levels of track force as the vehicle runs.

The CaFiBo project has received funding from the rail industry body, Rail Safety and Standards Board (RSSB), following a competitive selection process. A consortium led by ELG Carbon Fibre Ltd, which has developed cost-effective means of recovering carbon fibres from manufacturing waste and end‑of-life components, has been formed. The other members of the consortium are: Alstom Transport UK Ltd.; the Sensors and Composites Group at the University of Birmingham; the Institute of Railway Research at the University of Huddersfield; and Magma Structures Ltd. Magma Structures Ltd has produced carbon composite masts for some of the world’s largest super-yachts and specialised carbon pipes for the highly-regulated offshore industry. 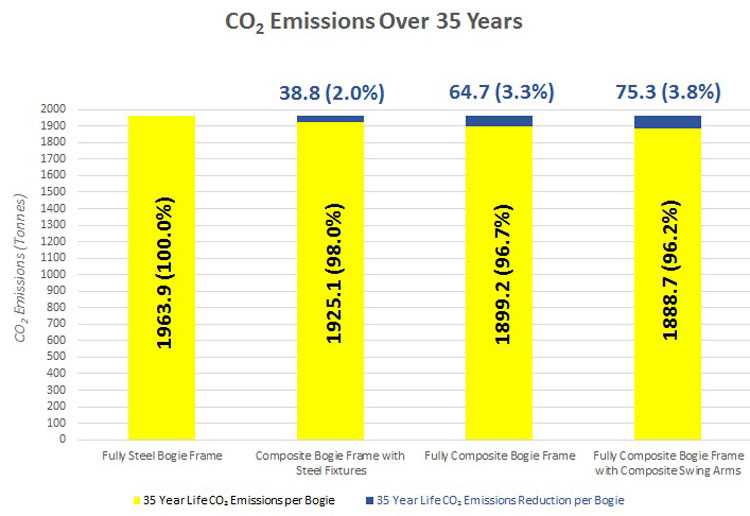 Figure 2: The reduction in CO2 emissions for one bogie over a life of 35 years for a carbon fibre bogie frame compared with a steel bogie frame.

The key innovations in the CaFiBo project relate to the use of carbon fibre composite construction, allowing the structural properties of the bogie frame to be tailored to the exact requirements of supporting and guiding the vehicle. Another key innovation is the use of recycled carbon fibre, derived from in-process waste from the aerospace and defence industry, which provides traceability and security of supply, as well as cost and sustainability benefits. Prime carbon fibre has been used as necessary to produce a structure that meets all the functional requirements.

Research has been carried out to support the innovative bogie in several areas. A major innovative feature is the use of fibre optics within the frame (provided by the University of Birmingham). Magma Structures Ltd use this technology in high-end marine applications, and it enables real-time health monitoring of the structure. The fibre optic structural performance monitoring system is based on known and proven technology, and it is being adapted to suit the loading requirements of the bogie. Data from the strain measuring system will be collected during the testing phase and the outputs will be used to validate the current predictive model design assumptions, whilst the system will be used as a basis for an in-service health monitoring system.

The bogie design is based on an Alstom Class 180 diesel multiple unit. The prototype composite bogie has a total mass of 940kg, including all of the steel fittings totalling 600kg, which represents a 36 per cent weight saving compared with the 1,468kg mass of the traditional steel bogie for the Class 180. Further weight savings would be possible if the steel fixtures could also be replaced with carbon fibre composite elements, and this would potentially result in a 60 per cent overall mass reduction.

The bogie frame consists of a carbon composite shell incorporating uni-directional carbon reinforcement with approximately 50 per cent recycled carbon fibre. The bogie has been manufactured using a specially developed fire‑retardant epoxy resin that met the requirements of EN 45545. Flammability testing has demonstrated that the material meets the fire retardancy requirements of the HL3 classification, the level above the HL2 classification, which is required.

The overall CaFiBo bogie design is based on the technical specification for the Class 180 bogies. This defines the operating conditions, the suspension system layout and the interfaces to the suspension components and the car body. It was decided by the project team that, to provide a comparison with the existing Class 180 bogie, the new carbon fibre bogie should be designed and tested to the same load cases. The testing defined in this specification has been derived from EN 13749. The loads specified reflect those used for the original bogie structural design, as detailed in the Alstom calculation report and test specification for the trailer bogie frame.

Testing of the composite bogie is being carried out at the Institute of Railway Research (IRR) at the University of Huddersfield. The bogie on test is shown in Figure 1. The load cases used to drive the testing are based on EN 13749 ‘Method of specifying the structural requirements of bogie frames’, which defines the loading cycles for the tests. These include static load cases, lozenging load cases, longitudinal shunt load cases and dynamic/quasi-static fatigue load cases, with a total of 10 million load cycles to be applied the frame. The ‘HAROLD’ full size bogie test rig at the IRR will be used for these tests. HAROLD includes two 50 tonne vertical hydraulic actuators, with additional hydraulic actuators used for longitudinal and lateral load cases and hydraulic rams used to simulate the twist of the bogie frame whilst under load.

The Institute of Railway Research (IRR) at the University of Huddersfield

The IRR carries out research to support the railway system, providing not only practical solutions to specific problems in the industry, but also making significant contributions to the understanding of some of the fundamental mechanisms of the wheel‑rail interaction on which the safe and economical operation of railways depends. The IRR is part of the UK Rail Research and Innovation Network (UKRRIN) and, within UKRRIN, it hosts the Centre of Excellence in Rolling Stock.

A lighter bogie brings benefits to the vehicle operator, the infrastructure manager and the wider environment. The main benefits to the vehicle operator are from the lower energy requirements for accelerating the vehicle to line speed, but there are also benefits from reduced braking requirements and reduced damage and, therefore, maintenance to vehicle components and sub‑systems. The benefits to the infrastructure manager are mainly due to the lower damage to the track caused by the lighter axle loads, although there could be wider benefits from shorter acceleration and braking distances and reduced time in key locations on the network. The benefits to the wider environment are mainly due to reduced carbon emissions from the lower energy use. Figure 2 shows the reduction in CO2 emissions for a carbon fibre bogie frame compared with a steel bogie frame over a lifespan of 35 years. For the constructed CaFiBo bogie, this is a reduction of 38.8 tonnes of CO2 for each bogie. But, if the steel fixtures were also made from carbon fibre, this would increase to 64.7 tonnes of CO2 and, for a fully composite bogie including swing arms, this increases to 75.3 tonnes of CO2.

Next phase of the project

Once the laboratory tests have been completed, it is hoped that on-track tests will be carried out in a follow-on project to progress towards acceptance of the carbon fibre bogie concept. It is anticipated that future designs will be able to make use of the inherent flexibility of the material, potentially reducing the need for separate suspension components.

The consortium, together with the National Composites Centre, are currently looking for further funding opportunities and partners to provide a route to commercial acceptance. Through track testing under realistic operating loads, the next phase of the project will address regulatory approval, as well as maintenance and end of life considerations. With the application of intelligent design, the project will establish guidelines to inform the design of future bogies to meet the growing demand for passenger rail.

Elliot Rothwell is a researcher at the Institute of Railway Research (IRR) at the University of Huddersfield. He works with standards governing bodies and other railway stakeholders and is involved in a large variety of research in the railway industry, from track wear to vehicle performance and commercial work.

Simon Iwnicki is a Fellow of the Royal Academy of Engineering and Professor of Railway Engineering at the University of Huddersfield, where he is Director of the Institute of Railway Research (IRR).

David Crosbee worked at Bombardier Transportation as a Dynamics and Suspension engineer, specialising in railway vehicle dynamics and suspension design. At the Institute of Railway Research (IRR) at the University of Huddersfield, David leads research and consultancy projects related to railway vehicle design.