How SJ is improving passenger experience one digital initiative at time 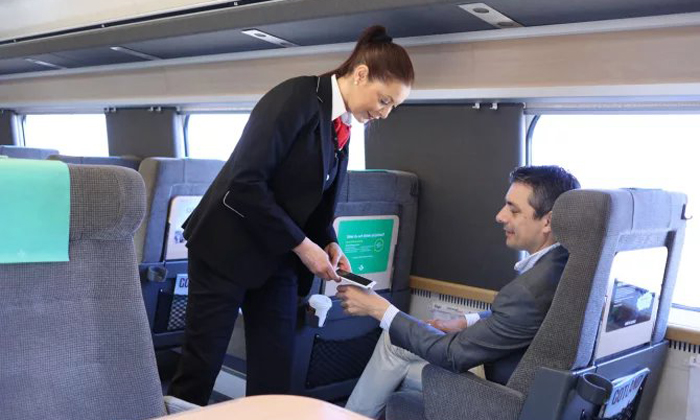 During the spring of 2017, SJ unveiled several exciting digital initiatives. In March, the Swish mobile payments service became a new option for customers buying tickets via SJ’s digital channels. May saw the introduction of microchip implant ticketing and the launch of ‘The Great Sign Hunt’, a contest to help develop a new feature in SJ’s mobile app that will assist train passengers in finding the right spot on the platform.

At SJ we are constantly working to improve the customer experience for Swedish train travellers, both onboard and online. The three digital initiatives unveiled in the spring of 2017 show that our drive to develop digital platforms for an enhanced customer experience has continued to gain momentum since its launch in 2016.

The objective remains to have Sweden’s most satisfied customers thanks to a world-class digital experience – before, during and after their train journey.

The Swish payment service lets users pay for purchases by direct debit from their bank account using a mobile app. Developed originally for person-to-person payments, Swish now also supports e-commerce transactions. SJ was one of the first major e-commerce businesses to offer this payment solution, which has over five million users and is adding 100,000 users a month. Swish proved an immediate hit with our customers. After just a few days, as many as one in three ticket buyers on the SJ app and one in five ticket buyers on the SJ.se website were paying through Swish.

Using Swish speeds up the purchasing process, and overall customer satisfaction with SJ’s digital sales channels has increased since the Swish option was introduced. The largest proportion of customers using Swish on the SJ website are in the 25-34 age group, but uptake has also been high among older age groups.

Smartphone users now account for more than 50% of SJ’s total sales through digital channels. We will continue to develop state-of-the-art digital services that make it easy for our customers to book train travel on their mobile devices.

For travel between Stockholm and Gothenburg or Malmö, SJ’s high-speed trains offer journey times to rival those of the airlines while winning hands-down in environmental terms. But that’s not enough. SJ needs to offer the kind of service that convinces passengers to choose rail over air.

A good example of this is our partnership with Epicenter, an innovation hub for start-ups and tech companies in Stockholm. Thanks to this partnership, business-class passengers travelling to Stockholm on SJ can get an Epicenter day pass, which gives them access to office space, conference facilities and other amenities. Epicenter members can use their NFC-enabled biometric chip implant instead of an access card for doors and printers. Some of the frequent business travellers at Epicenter contacted SJ about the possibility of using their microchip implant for train travel.

Thanks to SJ’s well-developed systems for digital ticket sales and customer identification, the essential technology was already in place. For instance, our traincrew members use their NFC-enabled phones to scan regional commuter passes. The suggestion was definitely worth putting to the test with the help of passengers who already had a microchip implant. The tests showed right away that the chip could be read even faster than conventional commuter passes.

The solution that SJ settled on was to keep the person’s membership number as the data to be stored in the implant. Since users have to be logged in to the SJ website or app to buy tickets, all their tickets can be automatically linked to their membership number. The membership number is not considered sensitive from a data security perspective, which is something we take extremely seriously at SJ.

A new feature was added to the SJ Labs app, our mobile testing application, where we try out new functionality and ideas with the aid of our customers. This new feature allows SJ Prio members to store their membership number in their implanted microchip using an NFC-enabled smartphone. They can then buy tickets in the usual way, but instead of showing the conductor their phone, printout or paper ticket, they simply hold out their hand containing the implant.

It remains to be seen how popular this idea proves to be with SJ customers. Currently an estimated 2,000 people in Sweden have biometric chip implants, and we don’t yet know how many of them intend to use their chip for train travel. However, this is a great example of how SJ regularly enlists the help of its customers to try out new technology designed to improve train travel and the customer experience.

After safety, punctuality is SJ’s highest priority. A number of variables are involved, most of them beyond our control. But in those cases where SJ can exercise some control, we pursue systematic improvements. Departure punctuality is a key part of the equation: one of the factors that determines whether a train departs on time is whether the passengers can board it without delay. Boarding can be a stressful experience for passengers, who have to make their way along the platform to the right car, often with luggage in tow. SJ recognises the benefit of helping passengers find the right spot on the platform before their train arrives.

That’s why SJ has unveiled a mobile app feature designed to help passengers identify exactly where on the platform they should be standing when the train pulls in. The objective is to make the boarding process easier and more efficient, to improve the customer experience, and to boost punctuality. 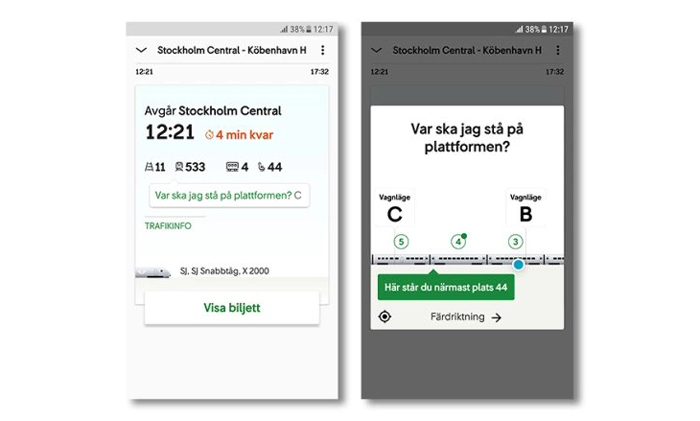 The feature has been developed in stages. The first stage involved using the SJ Labs app to test a new service called ‘Where should I stand on the platform?’ Over the course of 2016, customers were asked for their opinions and suggested improvements.

During the test phase the feature was available at three selected stations. Passengers were told via the app where to stand on the platform in order to board the right car. The response from the 5,000 passengers who tested the service was overwhelmingly positive.

When the time came to scale up the service to cover 44 stations across Sweden via the regular SJ mobile app, the exact coordinates of the car locator signs at each station were needed. We therefore launched a contest, ‘The Great Sign Hunt’, where participants were rewarded with bonus points in the SJ Prio loyalty programme. Using the contest feature in the SJ Labs app, travellers took photos of car locator signs at stations. The contest ran for three weeks and produced thousands of images, which now provide the basis for the new app feature.

Thanks to the involvement of our customers throughout the development process, the feature is now available to all SJ passengers. Reducing stress and uncertainty while boarding is another of the ways SJ is enhancing the overall customer experience of train travel.