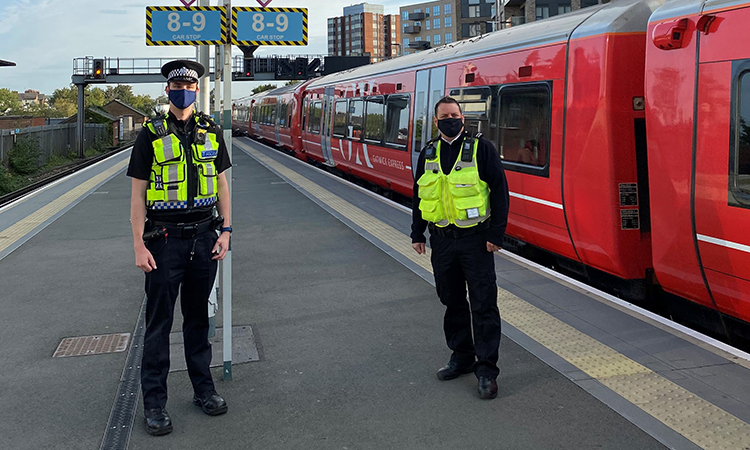 Four UK train firms – Great Northern, Southeastern, Southern and Thameslink – are working together with the British Transport Police (BTP) as part of a new pilot in London to further encourage passengers to wear face coverings.

The pilot – which is supporting the industry’s Safer Travel Pledge – will involve a member of railway staff and a BTP officer patrolling stations and trains together to remind people about UK government rules about wearing a face covering.

The trial builds on ongoing engagement with the public about wearing face coverings and is part of the railway’s ‘Four Es’ strategy for face covering compliance: ‘Engage, Explain, Encourage and Enforce’. While the vast majority of people follow advice about face coverings, fines will be issued to people who do not comply and refuse to leave the railway.

Face covering compliance on the railway is approximately 90 per cent and, together with the BTP, rail companies are committed to seeing how this can be increased further. This does not affect people who are exempt from wearing face coverings as part of the rules – for example, due to health reasons.

The pilot begins on 28 September 2020 and runs until 22 November 2020. Rail companies and the BTP will then consider the outcomes of the pilot, together with trade unions, before making decisions about how this could inform any changes to current working arrangements.

As of 24 September 2020, the BTP have stopped 54,175 people to remind them of the rules, asked 3,842 people to leave the railway and issued 81 fines to those who have not complied. In mid-September 2020, the UK government announced that the maximum fine a person could receive for not wearing a face covering is now £6,400 in England.

Director of Nations and Regions at the Rail Delivery Group (RDG), Robert Nisbet, said: “We thank the vast majority of people who are wearing face coverings to help stop the spread of coronavirus and, as part of our commitment through the safer travel pledge, we want to do even more to encourage passengers to wear a covering, unless they are exempt. This pilot is a great example of rail companies working together with the British Transport Police to help to ensure that people can travel with confidence.”

Martin Fry, Chief Superintendent for the British Transport Police, said: “We know that the majority of people want to do the right thing and comply with the law, playing their part in protecting each other by wearing face coverings, not only on trains, but also in stations. Those who do comply with the law, or are exempt, have no need to worry. However, there is a minority who deliberately flaunt the law. This not only needlessly makes passengers nervous about travelling, but it puts lives at risk.”

Chief Operating Officer for Govia Thameslink Railway (GTR) – which runs Great Northern, Southern and Thameslink – Steve White, said: “We all need to wear face coverings in stations and on trains, unless exempt, to protect those around us. This exercise with the British Transport Police will help reinforce that message to the small minority who perhaps don’t think it matters.”

David Statham, Managing Director of Southeastern Railway, said: “We know that wearing a face covering has been a big adjustment for everyone and are pleased to see the majority of our passengers are doing so. We would like to reassure our passengers that we are doing everything we can do to provide a safe environment for travel. Working alongside Great Northern, Southern and Thameslink with BTP on this pilot can only enhance the work that we are already doing to help people get to where they need to be in a safe fashion.”