Upon completion, the railway will redefine logistics and transport in the region, providing a modern, safe, efficient and sustainable mode of transport that will connect all regions of the UAE to its neighbouring GCC countries. 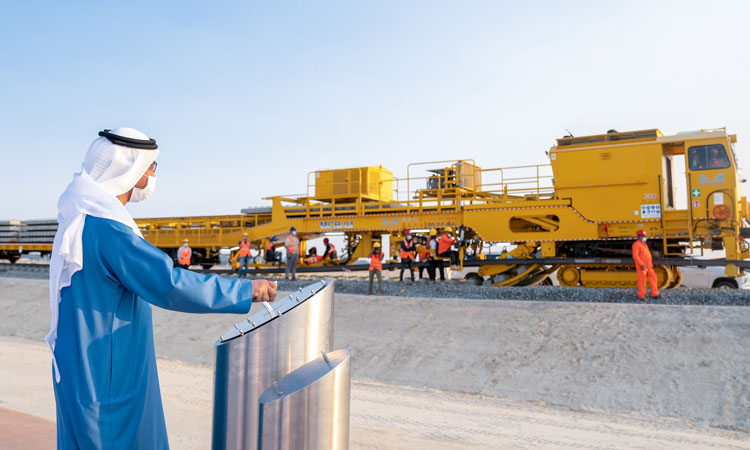 The first track has been laid in Al Ruawis, as work begins across the Al Dhafrah Region in Stage Two of the United Arab Emirate’s (UAE) national railway.

His Highness Sheikh Hamdan bin Zayed Al Nahyan, the Ruler’s Representative in Al Dhafra Region, inaugurated the ‘Package A’ works during his visit to Etihad Rail’s railhead in Al Ruwais.

Package A will connect the UAE rail network to Al Ghuwaifat on the Saudi border and the wider Gulf Cooperation Council (GCC) region. Work having begun in early 2020, Package A is currently 59 per cent complete. Half of the soil preparation works have been completed, with 79 per cent of sand and rock cutting also finished.

Etihad Rail successfully completed Stage One of the network, on time and on budget. The route spans 264km, transporting granulated sulphur from sources at Shah and Habshan to the export point at Ruwais.

Stage Two links the United Arab Emirates and Saudi Arabia from Fujairah Port to Ghuweifat through Mussafah, Khalifa Port and Jebel Ali Port. Built to international standards, Etihad Rail’s network will span approximately 1,200km. Upon completion, the railway will redefine logistics and transport in the region, providing a modern, safe, efficient and sustainable mode of transport that will connect all regions of the UAE to its neighbouring GCC countries.

His Highness Sheikh Hamdan bin Zayed Al Nahyan reiterated the UAE’s commitment to the development of a national railway network, which enables a sustainable transport sector.

Shadi Malak, CEO of Etihad Rail, referred to the importance of training and employing young nationals to lead this sector, pointing out that the company’s team includes several Emiratis working in key positions. In addition, he stated that Etihad Rail has established the first railway Diploma in the UAE, to train and qualify the young Emiratis to be the driving force for this national project, and confirmed that the first batch of students graduated in 2020 and are already working on site.