Alstom have announced that the world’s first hydrogen train, the Coradia iLint, will begin passenger service on a 100 per cent hydrogen operated route. 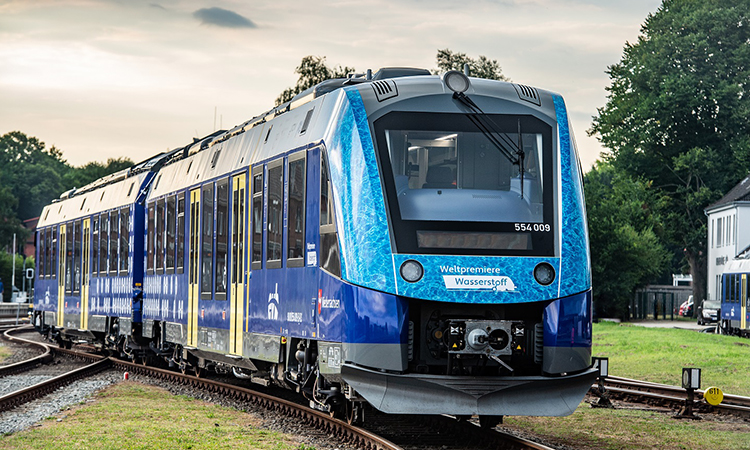 Alstom has announced that the world’s first hydrogen train, the Coradia iLint, reached another historical milestone in Bremervörde, Lower Saxony, Germany. It is now used on the world premiere 100 per cent hydrogen train route, in passenger operation. This regional train only emits steam and condensed water while operating with a low level of noise. The 14 vehicles with fuel cell propulsion belong to Landesnahverkehrsgesellschaft Niedersachsen (LNVG). LNVG had already started looking for alternatives to diesel trains in 2012 and thus provided momentum for the development of the trains in Germany. Other project partners for this world debut are the Elbe-Weser railways and transport company (evb) and the gas and engineering company Linde.

“Emission free mobility is one of the most important goals for ensuring a sustainable future and Alstom has a clear ambition to become the world leader in alternative propulsion systems for rail,” Henri Poupart-Lafarge, CEO and Chairman of the Board of Alstom, said. “The world’s first hydrogen train, the Coradia iLint, demonstrates our clear commitment to green mobility combined with state-of-the-art technology. We are very proud to bring this technology into series operation as part of a world premiere, together with our great partners.”

The Coradia iLint is the world’s first passenger train to run on a hydrogen fuel cell that generates electrical energy for propulsion. This completely emission-free train is quiet and emits only water vapour and condensation. The Coradia iLint features several innovations: clean energy conversion, flexible energy storage in batteries, and intelligent management of motive power and available energy. Specifically developed for use on non-electrified lines, it enables clean, sustainable train operation while maintaining high performance. On evb’s network, the train travels at speeds of 80 to 120, with a maximum speed of 140 kilometres per hour.

The Linde facility in Bremervörde contains sixty-four 500-bar high-pressure storage tanks with a total capacity of 1,800 kilograms, six hydrogen compressors and two fuel pumps. The use of hydrogen as a fuel for trains noticeably reduces the burden on the environment, as one kilogram of hydrogen replaces approximately 4.5 litres of diesel fuel. A later hydrogen production on site by means of electrolysis and regeneratively generated electricity is planned; corresponding expansion areas are available.

The project is funded by the Federal Ministry of Digital Affairs and Transport as part of the National Hydrogen and Fuel Cell Technology Innovation Programme. The federal government is contributing €8.4 million to the costs of the vehicles and €4.3 million to the costs of the filling station. The funding directive is coordinated by NOW GmbH and implemented by Project Management Jülich (PtJ).

On the route between Cuxhaven, Bremerhaven, Bremervörde and Buxtehude, 14 hydrogen-powered Alstom regional trains will be operated by evb on behalf of LNVG, gradually replacing 15 diesel trains. They will be fuelled daily and around the clock at the Linde hydrogen filling station. Thanks to a range of 1,000 kilometres, the Alstom multiple units of the Coradia iLint model, which are emission-free in operation, can run all day long on just one tank of hydrogen on the evb network. In September 2018, there had been a successful trial run of almost two years with two pre-series trains.

Alstom currently has four contracts for hydrogen fuel cell powered regional trains. Two are in Germany, the first for 14 Coradia iLint trains in the region of Lower Saxony, and the second for 27 Coradia iLint trains in the Frankfurt metropolitan area. The third contract comes from Italy where Alstom is building six Coradia Stream hydrogen trains in the region of Lombardy, with the option for eight more, while the fourth is in France for 12 Coradia Polyvalent hydrogen trains shared across four different French regions. Furthermore, the Coradia iLint has been successfully tested in Austria, the Netherlands, Poland, and Sweden to name a few.