With climate and environmental crises becoming major concerns of our society, the transport sector has started a deep transformation, in terms of technology and service. Even though railways have been granted the most climate-friendly label, due to their low CO2 emissions level per passenger, other transport modes (airplanes, buses and cars) are also on course to lower their impacts in order to maintain their social acceptance.

Consequently, railways still need to improve their performance in order to stimulate a modal shift from cars and planes to trains and help countries to achieve their CO2 emissions goals.

In addition, the ongoing pandemic situation has profoundly increased the financial pressure on railways, which are now compelled to implement performance levers.

Over the last 10 years, railway undertakings have started implementing Driver Advisory Systems (DAS). DAS are IT tools that provide live information to train drivers to help them be punctual while consuming as little energy as possible. They are powerful levers for traction energy savings (globally, between five and 15 per cent of total consumed energy1 according to the type of train) and present a high return on investment as no rolling stock modification is needed. Today, DAS are integrated in a portable device, such as tablets or smartphones.

They can work independently from traffic regulation (S-DAS for ‘stand-alone DAS’), or they can be connected to Traffic Management Systems (C-DAS for ‘connected-DAS’). C-DAS can provide additional benefits for traffic optimisation to recover delayed situations and avoid conflict situations.

Studies and first implementations revealed the limits of these tools. The development of DAS has been carried out mostly with a ‘bottom up’ approach. Some systems were developed by railways, others by the supplier industry with little to no harmonisation regarding data exchange between ground systems and on-board equipment that would allow for interoperability. Therefore, DAS cannot be easily deployed over borders between different infrastructure managers. The lack of harmonisation also creates the risk for infrastructure managers of being compelled to manage multiple interface protocols and for railway undertakings to be locked with proprietary IT solutions.

To successfully introduce DAS on a wide scale, it is essential that railway undertakings can choose from a selection of products and that the operation of DAS remains manageable for the infrastructure managers who provide the data to run the systems. With many railway undertakings on Europe’s tracks simultaneously, and many trains crossing borders, it must be ensured that all DAS devices can be served with the same data through a common interface.

For these reasons, the ‘Energy & CO2’ network of the UIC initiated the SFERA project to develop a DAS standard that: 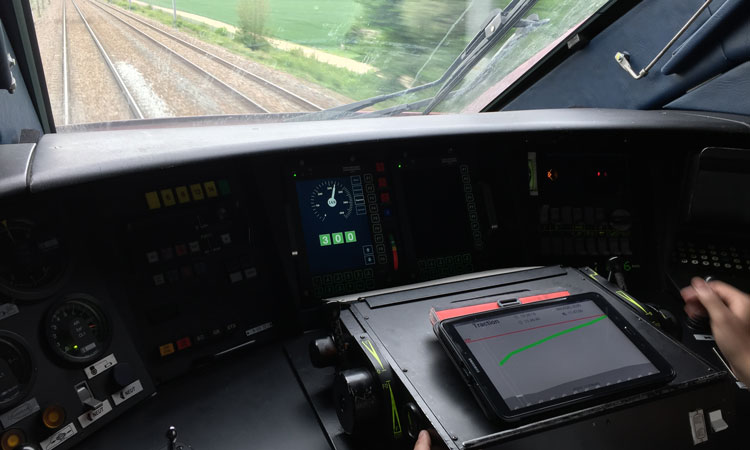 Test of a DAS using SFERA message on a Thalys trip, in the driver cab.

The goal: Interoperable and upgradable

The SFERA working group was tasked with providing the means to facilitate the use of C-DAS systems for all trains by standardising the data exchange between on-board and traffic management systems. With these instructions in mind, the group developed a standard that:

The SFERA project started in 2016, with the work being carried out between 2017 to 2020. Successful S-DAS tests were conducted in 2018 and 2019 on Thalys trains running from Paris to Amsterdam and have demonstrated the applicability and stability of SFERA.

After 15 meetings and around 50 web calls, the IRS 90940 is born. Its name is Data exchange with Driver Advisory Systems (DAS) following the SFERA protocol.

All throughout the project, the working group paid close attention to stakeholders’ involvement. To make sure that every constraint and comment had been considered, the project team organised a stakeholder workshop in Paris in November 2018 and a webinar in June 2020. These two events gathered between 80 and 140 experts each. Every question has been answered, either live or afterwards through publication. In addition to the UIC formal IRS approval process, two sessions of IRS’ review by the stakeholders were organised.

What does SFERA bring to the table?

Standardisation of data exchanges between TMS and trains will be introduced in the 2022 TSI. These specifications, developed by the Shift2Rail group in charge, concentrated on defining the elements for the following use case: ATO GoA2 operation over ETCS.

The SFERA working group identified the corresponding standard (UNISIG SUBSET-126, which specifies the link between the infrastructure manager and the trains) as containing the core elements also needed for DAS operation. SFERA kept the entirety of the data elements of this standard, and provided additions to SUBSET-126, with the goal of supplying data for DAS operation on any train journey on the European railway network, from start to finish.

While SUBSET-126 covers train runs under ETCS, SFERA adds the necessary elements to include all class B signalling and ATP systems in Europe. For example, a DAS needs to identify the point from which the train would start braking to respect a new speed limit. In most Class B systems, this is usually given by a distant signal positioned at a safe braking distance of the speed transition, and is usually common to different train types. However, in ETCS, the braking point is calculated on-board by each train by taking into consideration the characteristics of the train (braking capabilities, weight etc.), which means that distant signals do not exist.

SUBSET-126 is based on the following postulates:

This is not true for DAS operation: 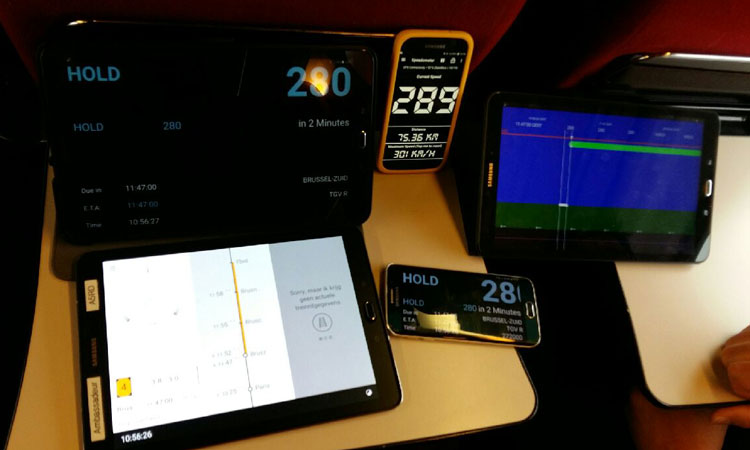 Set of different devices used for the first Thalys test in October 2018.

Research is being pursued in Europe concerning the stability of power networks and power distribution: smart grids. SFERA introduces elements that will permit to:

DAS and ATO help to use existing infrastructure to its full capacity by introducing means for improving driving precision and real-time implementation of decisions taken by the regulator. For those objectives to be met, the percentage of trains equipped must be as high as possible. Trains without DAS tend to be less predictable and will not react to traffic management decisions until a radio call is made by the regulator. This limits overall performance.

ATO is regarded as the end game, as the precision of driving is unrivalled and guaranteed in all situations. However, it has the drawback of high investments, which means that deployment could take decades.

DAS helps drivers approach the performance of ATO operation in driving precision with much lower investments and helps railways in their transition to ATO. Performance can be improved on parts of their networks by implementing DAS, while ATO investments can be prioritised on network sections that need to maximise performance in the short-term.

IRS 90940 is now available on the UIC Railway Technical Publications (ETF) online shop, free of charge. But the effort for more efficiency in railways is not over. The UIC is determined to ensure that the SFERA protocol will correctly fit with user needs and stays up to date according to its environment and constraints (regulatory and technological watch, new version of ATO subsets and change in related standards).

Therefore, two groups are being created. The first one is the Maintenance Group, which will be launched in October 2020 and is composed exclusively of UIC members. It will meet twice a year to:

The second group is the User Group, composed of companies that use SFERA. It will be organised by the UIC and the Maintenance Group and will be dedicated to experience sharing and mutual assistance. It is open to non UIC members who can submit change requests to the Maintenance Group.

Anyone who would like to join is invited to send an email to [email protected].

The next event to watch is the NS ATO test planned in October 2020 on a Class B line between Haarlem and Den Haag using SFERA!

Chloé Lima-Vanzeler has worked at SNCF since 2009 on sustainability issues and has been in charge for five years managing the train energy efficiency programme, including the implementation of an energy measurement system and the coordination of efficiency projects (eco-driving, eco-stabling, rolling stock improvement etc.). She represents SNCF Passengers at the UIC ‘Energy and CO2’ network.

Sébastien Dislaire started working in 2010 as a systems engineer in the signalling department of SNCF Réseau. In 2016, he took a role as a business analyst in charge of the data exchanges of SNCF’s traffic management systems.

Thomas Sutter has worked for SBB since 2000 when he started as an apprentice. After working in different positions in traffic control at Zurich Main Station, he worked as project manager in different strategic initiatives for instance SBB’s Traffic Management System (TMS), Connected Driving Advisory Systems (C-DAS) and Operations Centre development programmes. Today he is part of the corporate development team for SBB Infrastructure’s timetable planning and operations department.