The ÖBB Rail Cargo Group (RCG) has announced that it is expanding its network with a new TransFER connection. With this new service, the RCG offers an efficient, eco-friendly transport service between Northern Italy and Northern Germany for continental supply chains.

From 29 March 2021, the new TransFER service will begin to provide a non-stop intermodal rail connection running four times a week between the rail freight transport centre, Interporto Quadrante Europa, in Verona, Italy and the rail terminal at Hannover-Leinetor. 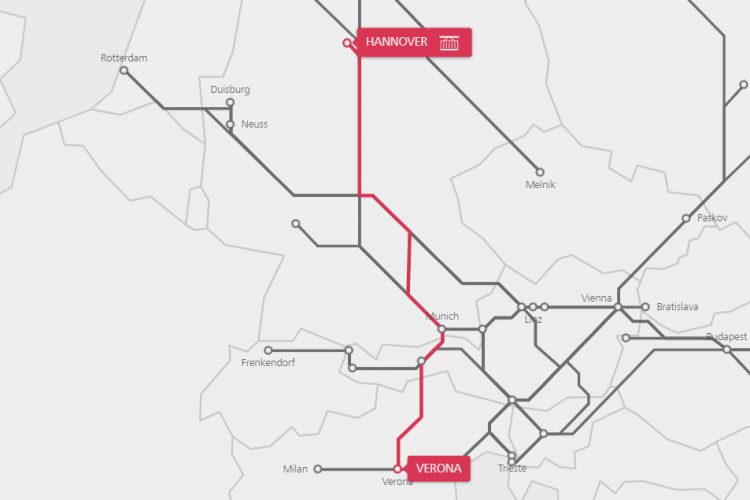 This new ÖBB TransFER connection offers more opportunities to shift transport to rail on the Brenner Axis. This eco-friendly, high-frequency transport service could take up to 256 truck journeys a week off of the roads in Austria, a country that experiences heavy transit traffic.

This new intermodal rail connection will play a key role in relieving this region of the burden of transit traffic and its population of noise pollution. With its services, the RCG is helping to protect the climate and is making headway in the race to counteract the vicious cycle of transit traffic on the Brenner.

With its rail freight centre, Interporto Quadrante Europa, Verona’s convenient location makes it highly important for the regions of Venetia and Northern Italy. Venetia’s economy is the third strongest in Italy, with its industrial focus in the fields of mechanical and electrical engineering, metal construction, the fashion and textile industries, plastic, automotive, furniture and food production. Germany has long been the first port of call for Venetia, and for Italy as a whole, when it comes to exports.

Lower Saxony, with its capital, Hannover, is the fourth largest federal state in Germany in terms of its economic output. It is directly located on the North Sea coast and has an extensive rail and waterway network, as well as a wealth of motorway links on the North-South and the West-East axis. The rail terminal in Hannover benefits from this. Lower Saxony has a host of global companies in the automobile and food, shipbuilding and chemical industries.