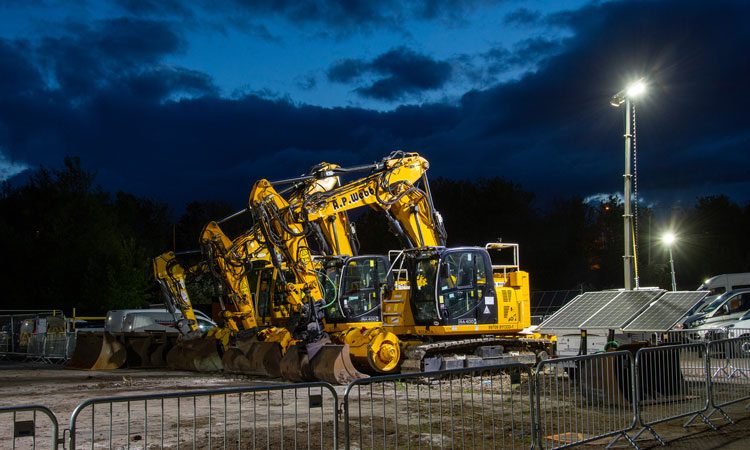 Worksite in Llanwern, South Wales where 97 per cent diesel-free working was achieved

Presented to Network Rail for the first time, the award recognises the work of the organisation’s IP Track delivery teams in committing to sustainability. Network Rail is one of just nine organisations worldwide that has earned a Globe of Honour in 2019 – recognising companies that have demonstrated excellence in environmental management.

“We used the BSC’s rigorous audit specification to enhance our environmental management systems and processes but, just as importantly, IP Track embarked on an awareness campaign which significantly increased colleagues’ understanding of the sustainability agenda and how they can personally contribute to it.

“We’ve also worked with our supply-chain to introduce sustainability packs and help future proof their environmental management, ahead of the introduction of Network Rail’s environment and social requirements, which launch in December 2019.”

Steve Featherstone, Programme Director, IP Track, said: “We have used the BSC as our partners on our safety and sustainability journey over recent years. The BSC process holds a mirror up on our performance and challenges us to get better.

“For this latest honour to sit alongside our eight Safety Swords of Honour is a fantastic achievement and recognises the efforts of everybody in the team.”

Lawrence Waterman, Chair of the BSC, said: “On behalf of the board of trustees and staff on the British Safety Council, I would like to congratulate Network Rail on achieving the very highest standards of health, safety and environmental management. Excellence at this level is very hard won. We are proud to have supported you in your achievements.”

The globes will be presented at a ceremony on Friday 22 November 2019.