The new HS2 station will improve access to the Midlands, including Birmingham International Station, the NEC and Birmingham Airport (BHX). 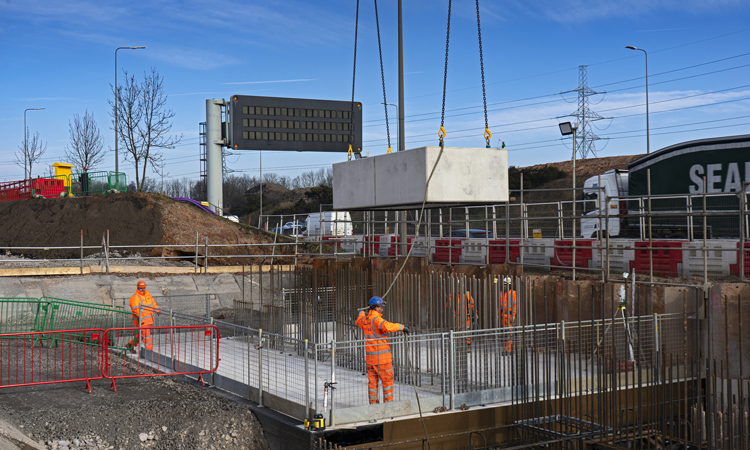 Preparatory work for the development of HS2’s new Interchange station in Birmingham has almost reached completion, with major structures currently being put in place on site. The station will be the new public transport gateway serving the Midlands, located within a close distance to Birmingham International Station, the NEC and Birmingham Airport (BHX).

The site covers a total area of 150 hectares and is located within a triangle of land formed by the M42, A45 and A452. Works currently underway include construction of modular bridges over the M42 and A446, and the remodelling of the road network in the area to facilitate access to the new station, as well as easing access to and from Birmingham Business Park.

HS2 Ltd’s Stations Director, Matthew Botelle, said: “It’s really exciting to see how much progress has been made on our Interchange site since early works started last summer. For the team working on one of the project’s biggest construction sites, it’s great to see it developing by the day, with bridges and roads already being built, paving the way for construction of the railway. As a transformational project, HS2 will play a pivotal role in creating regeneration opportunities around the station, with plans for new jobs, homes and commercial space resulting in a huge boost to the regional economy.”

The new station development is focused heavily on sustainability, during both construction and operation. Currently, the site is using solar panels to generate power for the site offices, and at least 90 per cent of construction waste, demolition waste and excavated material is being reused.

Additionally, the station will operate with net-zero carbon emissions, adopting the latest environmentally friendly design and sustainable technologies – for example, rainwater harvesting and sustainable power generation with more than 2,000m2 of solar panels.

Approximately 200 people are employed to work on the site from HS2’s Early Works contractor, LM – a joint venture between Laing O’Rourke and Murphy. This will increase to 250 people as the construction of new bridges and access roads begins.

Simon Russell, LM Project Director, said: “Much of our early works programme has now been completed on the site by the LM team, including habitat creation, archaeological investigations, site clearance, and utilities diversions. We are now pressing ahead with the project’s first permanent works near the A452, A45 and M42, including a bridge over the M42. Our modular bridge construction strategy showcases innovative British infrastructure engineering at its best – major components manufactured offsite and assembled onsite, where they’re needed – ensuring quality, efficiency, and hugely reducing local impacts.”

Additionally, major regeneration plans around the site – led by the Urban Growth Company – will support 70,000 new and existing employment opportunities, 5,000 new homes and 650,000m2 of commercial space, which is expected to generate an additional £6.2 billion GVA per year and bring 1.3 million people to within a 45-minute commute of the station.

HS2 will offer an environmentally friendly form of transport for long distance passengers and aim to ease congestion and over-crowding by freeing up space on existing lines for new local train services, passengers and freight. Up to five trains will pass through the new Interchange station in both directions every hour, with an estimated total of 175,000 seats per day.