The future of rail: Alternative powers and will Hyperloop become a reality?

It is a fairly common belief that how we travel in 2019 is unlikely to be the same by 2100, and rail transport is no different. Working with teams taking part in this year’s Hyperloop Pod Competition, RS Components have shared how they believe rail transport will change; from networks being powered by fully renewable energy, to the development and implementation of the Hyperloop. 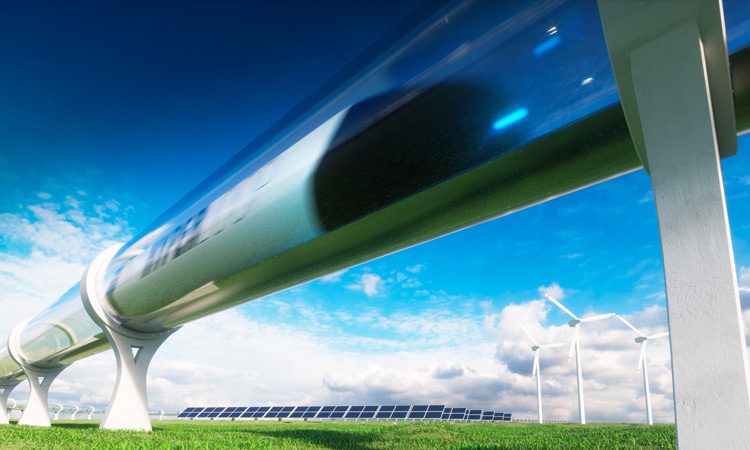 In the predictions from the Hyperloop UPV and Éirloop teams, they estimate that by 2030 all ground transport will be running on renewable energy, including rail transport.

One example of railways running on renewable energy sources can be found in the Netherlands where the NS Dutch Railways network has been running entirely on wind-generated power since 1 January 2017, using wind turbines from energy firm Eneco, to power the network of the entire nation.

An alternative to wind power is solar and one British firm, Bankset Energy, is pioneering the way. Developing new ‘sleeper’ panels, which will sit on the tracks and turn light from the sun into energy for trains and the local area, reducing the need for fossil fuels on the network.

While wind turbines and solar panel technology can be used for parts of the network that are suitable for electric lines some, especially remote areas, will not be able to benefit from the implementation. In these instances, the development of hydrogen trains is likely to be the way forward. Burning hydrogen with oxygen, the combustion produces huge amounts of power but unlike their CO2 emitting diesel cousins, produces pure water as a byproduct.

In the UK, Alstom and Eversholt Rail announced that hydrogen trains could be running on the British rail system by as early as 2022, which shows how soon the technology could be rolled out. Meanwhile, in China and Germany, hydrogen-powered trains have already been transporting passengers.

Alexandra Berger, Senior Vice President of Marketing & Communications, EMEA at RS Components, said: “The Hyperloop Pod teams predicted that we would be running on renewable energies by 2030, and it is really quite impressive to think that many of the technologies needed to make this a reality are already in progress, or in place, in some parts of the world.

“Electrifying the UK’s and world’s rail networks is a process already well underway and something that, with the increasing evolution of ‘direct to the network’ renewable power sources, could soon be expanded to more areas of the world.

“Additionally, the development of hydrogen-powered trains, and more networks looking to add them to their stock could turn the rail system carbon neutral even sooner. Therefore, making it possible for areas that aren’t suitable or able to run on purely electrified rail lines to reduce and in the near future completely stop their CO2 emissions.”

Hyperloop is probably one of the most discussed ‘future of transport’ topics, with Elon Musk and, until October 2018, Richard Branson leading the charge to its implementation. However, the question remains – when will it ever start running?

According to the Hyperloop UPV team, we could be seeing the first Hyperloop commercial cargo line running in just six years (2025) and the first passenger-carrying Hyperloop in just over a decade (2030). This prediction could be a reality even sooner than this with Virgin’s Hyperloop One estimated to start running commercial routes by as soon as 2021/2022.

Meanwhile, in October 2018, Elon Musk announced that the Boring Co. would be opening its first test tunnel – the Hawthorne test tunnel – in December 2018. Which, running on a similar system to the Hyperloop, would propel passengers 155 miles per hour. While not quite the 760 miles per hour touted for the Hyperloop, is a step in the right direction to Elon Musk vision.

Another company in the race to make the Hyperloop UPV team’s predictions a reality is Hyperloop TT who unveiled its passenger carrying pods in October 2018. This was shortly followed by the announcement they would start construction of the first commercial Hyperloop system in Abu Dhabi in Q3 of 2019.

Alexandra said: “There is clearly a movement to make the Hyperloop more than just a pipedream and the investment of time, money and resources to open the first commercial route is well underway.

“With the Boring Co. and Hyperloop TT announcements, in October 2018, and Virgin’s Hyperloop One estimated to have it first routes open in just two to three years, we really are close to entering a new age of transport.”

Another team in this year’s Hyperloop Pod Competition, Éirloop, predict that by 2035 we will be seeing the beginning of widespread adoption of the Hyperloop.

The Éirloop team believes that by 2035 people will be able to live in one country and work in another. The team also believes that Hyperloop could be a solution to the housing crisis; allowing people to work in high-cost corporate epicentres, such a London, and live in cheaper, less busy cities such a Nottingham and Leicester, or even as far as Edinburgh and Glasgow.

The shorter journeys into the capital will open up job opportunities and allow companies to attract talent and give employees a better work/life balance, by cutting commuting times by up to 10 times in the UK.

It’s not just employment that would benefit, the Hyperloop will also improve access to education. With universities spread around the country, choosing the right one – but also one not too far from home – can be a challenge that people can face when selecting their prospect university. However, with city-to-city links via Hyperloop reducing travel time, students would no longer be limited to selecting universities close to home.

“Hyperloop could be a tremendous opportunity for human civilisation, allowing freedom of movement to an unprecedented level, compared to just 15/20 years ago, “ explained Alexandra. “With space in and around corporate hubs at a premium and increases in the cost of living consistently outpacing wages, the Hyperloop would be an excellent way of levelling the field and allowing companies that would otherwise miss out on top talent due to travel distances to be able to bring those people in. While nothing is certain, Hyperloop seems to be on the horizon to become a reality.”

One response to “The future of rail: Alternative powers and will Hyperloop become a reality?”