The Midlands Rail Hub has outlined plans of up to £2 billion for new and improved rail infrastructure, to be completed between 2024-2033. 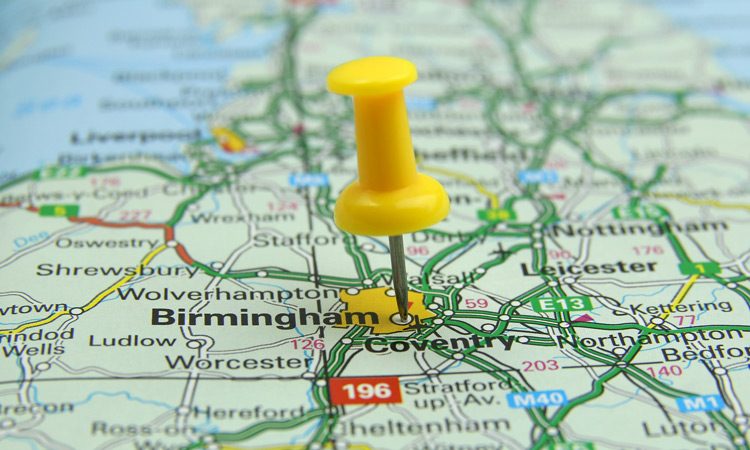 A £2 billion package of improvements to transform east-west connections on the UK’s Midlands’ rail network has been submitted to the government with a clear message from business and civic leaders: “Don’t ignore the Midlands”.

The Midlands Rail Hub has outlined plans to build 15 pieces of new and improved infrastructure to enable 24 extra passenger trains every hour on the regional network, reduce journey times, make space to shift 4,320 lorries’ worth of freight from the road to the railway every day and supercharge the economy by bringing the East and West Midlands closer together. 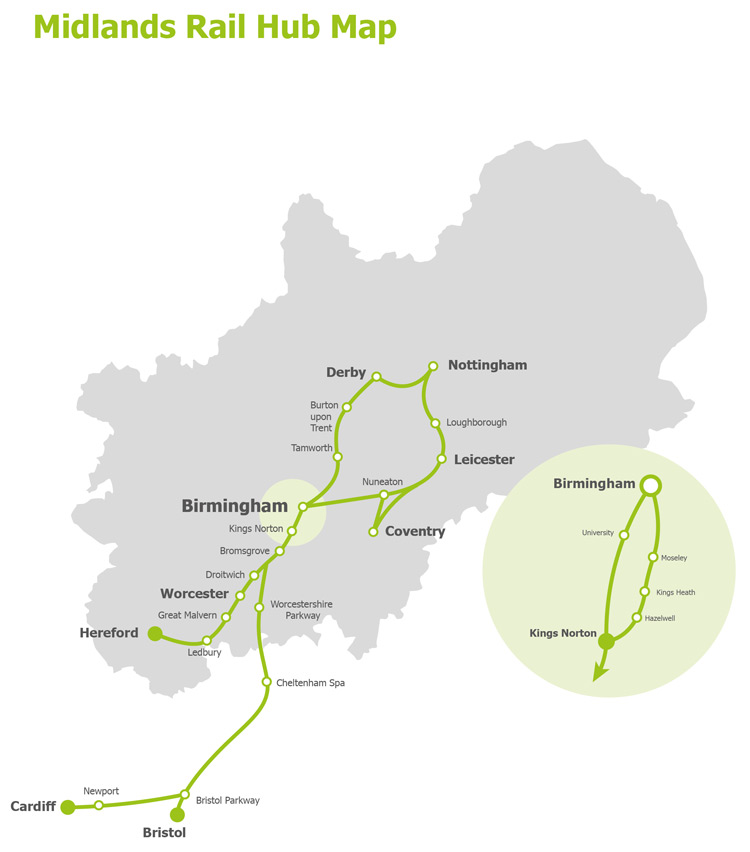 Suggested to be completed in phases between 2024 and 2033, the plans have been submitted to the government by sub-national Transport Body Midlands Connect, in partnership with Network Rail and with the support of 47 partner organisations including West Midlands Combined Authority, local authorities, LEPs, chambers of commerce, HS2 and Birmingham and East Midlands airports.

To keep pace with demand

Adding more capacity into the railway will future proof the network for the next generation, with significant benefits for passengers, freight and the economy, including: 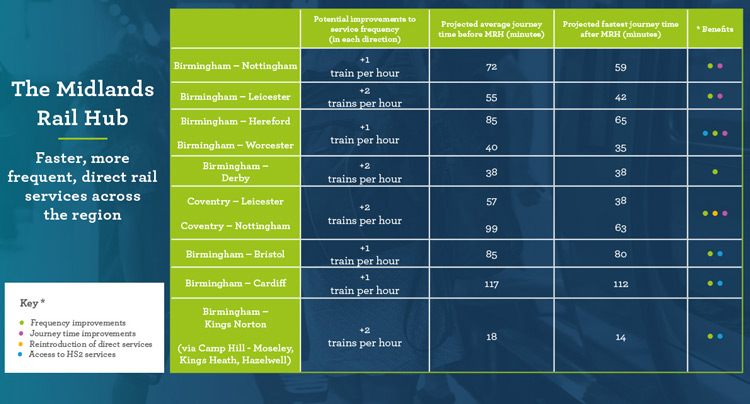 Midlands Connect, alongside its partners and the business community, has repeatedly made the case for the delivery of HS2 in its entirety, alongside associated investment in the existing rail network.

The Midlands Rail Hub creates space for dozens of additional services to and from Birmingham Moor Street station each day. The project is fully integrated with a vision to redevelop the historic 1909 station, led by West Midlands Rail Executive. This vision, including a shared Station Square with the new Curzon Street station, is part of a ‘One Station’ concept, which also includes better pedestrian access to nearby New Street station, ensuring passengers can move seamlessly between the traditional and high-speed networks. 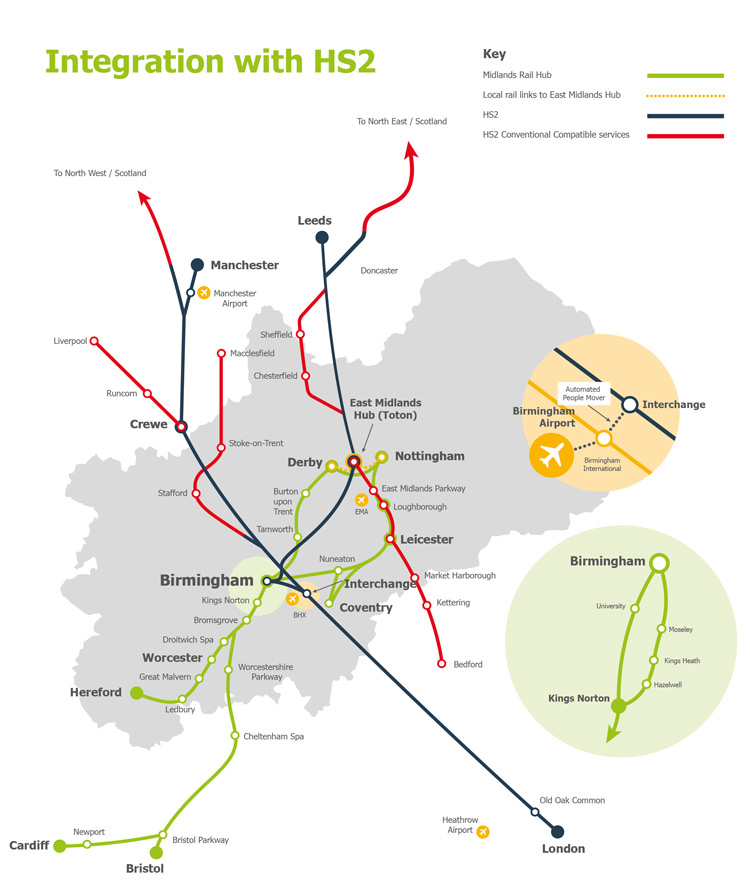 Slow, indirect and infrequent rail services between big cities mean that most travellers make less environmentally-friendly journeys by car instead1:

On equivalent routes in the north of England, rail usage is significantly higher: 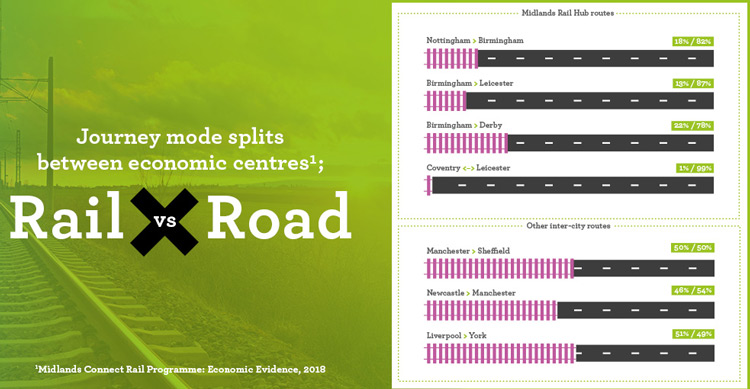 Rail freight produces 76 per cent less CO2 than the equivalent road haulage journey. By introducing 36 new freight paths a day, the Midlands Rail Hub can take the equivalent of 4,320 lorries’ worth of goods off the road and on to rail every day, significantly reducing carbon emissions.

Sir John Peace, Chair of Midlands Connect, said: “The Midlands Rail Hub is a cost-effective, evidence-led plan to upgrade our Victorian infrastructure to meet the demands of the future. These proposals capture the enormous economic potential of the Midlands, with 320,000 new jobs estimated by 2030, mainly in professional services firms who depend on good rail connectivity to attract skilled workers. This investment must happen alongside delivering HS2 in its entirety, from the West Midlands to the East Midlands and on to the north of England. The next Prime Minister of this country must not ignore the Midlands, the 10 million people who live here, or our £220 billion annual contribution to the UK economy. Now is the time for the government to prove to the Midlands it’s listening to us.”

Andy Street, West Midlands Mayor, said: “The Midlands Rail Hub is a really important investment for the whole of the region – and it comes with my support and the support of the East Midlands. Rail has been a huge part of the Midlands’ success story, and we need this kind of investment if our network is to keep growing and supporting our economy. At around £2 billion, the Midlands Rail Hub is genuinely a bargain when you consider some of the projects that have already happened in London. The Secretary of State for Transport must persuade the Treasury to support this project to boost the region’s connectivity and with it, the region’s economy.”

Tim Shoveller, Managing Director for Network Rail’s North West & Central Region, said: “Passenger numbers are set to rise by 12 per cent in our region over the next five years. When realised the Midlands Rail Hub will transform rail travel for millions more passengers every year. We share our partners’ vision for the Midlands Rail Hub which will give passengers more choice and drive economic growth by better connecting towns and cities across the East and West Midlands.”

Mike Lyons, HS2 Programme Director for the West Midlands, said: “It’s essential that investment in the existing rail network is planned and delivered alongside the work we are already doing. We’re working closely with Midlands Connect and Network Rail to secure the transformation in rail connectivity this region deserves. Both the Midlands Rail Hub and HS2 are about creating much needed new capacity and allowing more people to travel more frequently to more destinations. These projects will supercharge the Midlands economy, and the region needs both if it is to reach its potential.”

Lindsey Durham, Head of Rail Strategy, Freightliner Group, said: “Freightliner is backing the Midlands Rail Hub because, for the first time, we have a long-term strategy for rail infrastructure in the region. We’re moving everything from clothes and mobile phones to building supplies and industrial commodities on the railway, and by reducing bottlenecks and congestion for freight trains we can move more goods in an environmentally-friendly way that supports the regional and the national economy.”

Lilian Greenwood, MP for Nottingham South and Chair of the Transport Select Committee, said: “Our people and businesses are suffering from poor connectivity and it’s time that government took action to bring the great economic centres of the Midlands closer together. The Midlands Rail Hub is a vehicle for change, it will change where we work, where we live and who we do business with, it will encourage us to make greener choices and allow the network to keep pace with growing demand. We must accelerate these plans to enable faster, more frequent journeys across our network and to make more space for freight trains that will transport goods UK-wide.”

Following the submission of the Midlands Rail Hub Strategic Outline Business Case to the Department for Transport (DfT), Midlands Connect has requested an additional £25 million in funding to bring the project to ‘Outline Business Case’ stage of development, which includes specific scheme development and sequencing, a full overview of benefits, project designs and a full risk assessment.