Hydrogen-powered train to start trial operation in Bavaria in 2023

Developed by Siemens Mobility, the two-car train is to be tested on the Augsburg-Füssen route, among others, beginning in mid-2023. 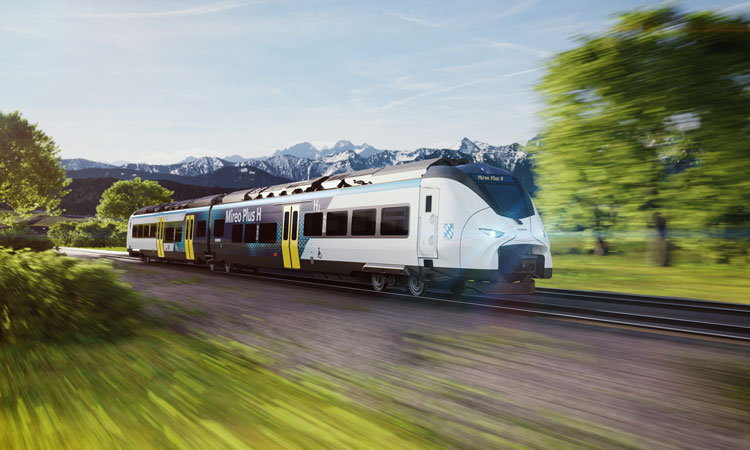 The Bavarian State Ministers for Economic Affairs and for Transport have announced the support of testing in Bavaria of a hydrogen-powered train developed by Siemens Mobility GmbH.

The two-car train is to be tested on the Augsburg-Füssen route, among others, beginning in mid-2023. The pilot operation in the rail network of Bayerische Regiobahn (BRB) is initially planned for 30 months. The hydrogen-powered train will be stationed in Augsburg during this time.

A Memorandum of Understanding (MoU) to this effect was signed on 12 July 2021 by Minister for Economic Affairs Hubert Aiwanger, Minister for Transport Kerstin Schreyer, and top representatives of Siemens Mobility and Bayerische Regiobahn (BRB).

The hydrogen-powered train is being developed on the basis of the Mireo Plus H platform from Siemens Mobility. It is designed to operate on non-electrified rail lines and has a range of up to 800km. The main components of the hydrogen traction drive are two fuel cells mounted on the roof. The system uses the latest generation of batteries that are installed beneath the floor. The train will be presented to the public in the spring of 2022. The first test runs in Bavaria are planned for 2023, before the train officially enters passenger service in January 2024.

Bavaria’s Minister of Economic Affairs, Hubert Aiwanger, is especially pleased about the development partnership: “The train is another important component in Bavaria’s hydrogen strategy. My ministry is promoting research, development and applications in the field of hydrogen technology. We’re organising this rail project together with our partners because we’re convinced that hydrogen technology will make a significant contribution to decarbonising transport. We’ll prove in Bavaria that business and climate protection can be reconciled with green hydrogen.”

Kerstin Schreyer, Bavarian State Minister for Housing, Building and Transport, explained: “The Free State of Bavaria sets itself ambitious climate targets and wants to implement a clear climate protection strategy in the transport sector. Innovative technologies and green hydrogen play a special role in this. In addition to the direct use of electricity, hydrogen has the potential to be used in a wide range of flexible applications, so that the rail transport sector can also be completely converted to renewable energies in the future. I am pleased that the Free State can also test this innovative technology in regular operation in this project.”

Karl Blaim, Managing Director of Siemens Mobility, said: “The technology partnership between Siemens Mobility and the State of Bavaria enables the further development of the Mireo Plus H for Bavaria and supports climate-friendly passenger transport in the state.”

Arnulf Schuchmann, technical Managing Director of Bayerische Regiobahn, said: “We agreed to test hydrogen technology and to test the Siemens Mobility train in passenger service because we are curious and open to alternative forms of propulsion in the railway sector as well. Within the Transdev Group, to which we belong, there is already a lot of experience with alternative drives in the bus sector. However, it is by no means enough to put the hydrogen train on the track, since many aspects have to be taken into account during operation. Safety requirements have to be implemented, staff training, the refueling of the vehicle, the routes on which it will travel, and many other activities have already begun.”