The report outlines Greater Anglia’s efforts in improving the sustainability of its operations and decreasing its carbon emissions. 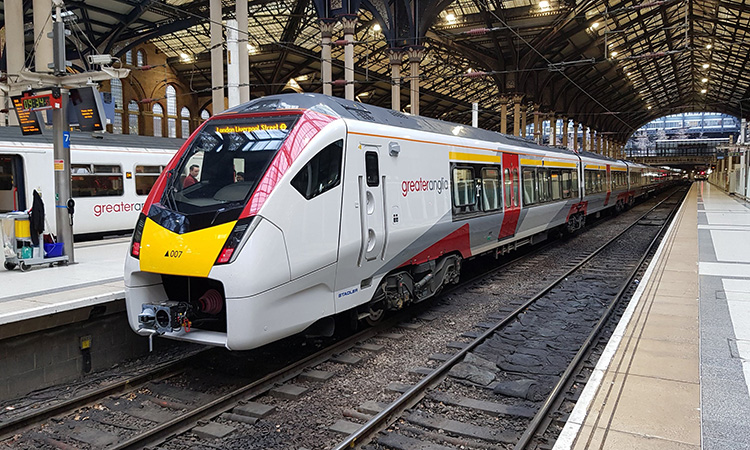 Greater Anglia has published its first annual Environment and Energy Report, detailing its achievements and plans for greener travel in East Anglia.

The train operator has been working to minimise its carbon emissions – reducing them by 11 per cent in 2019 – and become an even more sustainable organisation. This has seen Greater Anglia introduce new more energy-efficient trains, cut waste, increase recycling and work with partners and communities on projects to improve sustainability and biodiversity at stations.

Commenting on the publication of the report, Greater Anglia’s Environment & Energy Manager, Stephanie Evans, said: “It’s important that we get the message out there, let people know that we are working to become even more environmentally friendly and start making the case for choosing the train over the car – ready for a time when we can start to get back to normal after COVID-19.”

“Research shows that trains are the most environmentally friendly form of transport after cycling and walking, with greenhouse gas emissions per kilometre by rail being far less than cars. Because of this, we hope that rail will be an important part of the ‘green recovery’ we are all aspiring to, helping communities stay connected to jobs, education, family, friends and leisure opportunities in a way that helps to reduce everyone’s carbon footprint. Our new trains are more efficient and produce less particulate pollution than our old ones which will help to make rail travel in East Anglia an even more environmentally friendly option,” she added.

All of Greater Anglia’s existing diesel trains in Norfolk, Suffolk and Cambridgeshire have now been replaced with bi-mode trains, which can switch between diesel and electric power. The diesel engine meets the latest tighter standards for emissions.

When the bi-mode trains are running underneath an electric line, they can switch to electric mode and take advantage of electric energy rather than diesel. As with other modern electric trains, energy created when braking under an electric line is put back into the overhead wires to be used by other trains to accelerate – further helping to save energy.

Even in diesel mode, the trains can brake electrically by using a brake resistor, which means there are less brake pads used so less dust is produced and released into the environment. When running in diesel mode, the engines generate electricity for the motors, enabling the train to accelerate more powerfully and smoothly. The train’s design is also future proof, allowing possible upgrades to full electric operation or even use of battery storage.

The aerodynamic front and special lightweight construction improves efficiency when the train is travelling at 100mph. The trains do not need to run at full power to keep to the timetable, due to highly efficient and powerful motorisation – a great energy saving feature.

The rest of Greater Anglia’s electric trains are also being replaced with new trains – made by UK manufacturer Bombardier Transportation. They are lighter than the trains they will be replacing and, in common with the Stadler trains, they feature regenerative braking, which delivers energy back into the electrical supply network rather than waste the energy, through heat, as conventional brake systems do. The Stadler electric trains can actually generate more electricity when braking than they use while accelerating.

Greater Anglia worked with The Carbon Trust to quantify its environmental impact and understand its carbon emissions as part of an aim to become even greener and more sustainable. Recently, it was given an internationally recognised stamp of approval for businesses committed to reducing their impact on the environment, meaning that it could retain its ISO 14001 and ISO 50001 environment and energy certifications.